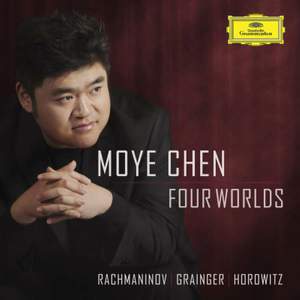 Rachmaninov: Minuet from L'Arlésienne (after Bizet)

Horowitz, V: The Stars and Stripes for Ever (after Sousa)

A clear crowd favourite at the 2016 Sydney International Piano Competition (SIPCA) due to his incendiary technique and warm stage presence, Moye Chen was awarded the George Frederick Boyle Prize and was signed to Universal Music Australia shortly after.

For his debut recording - released in Australia on the legendary Deutsche Grammophon label - the Chinese pianist coalesces four worlds as he traces the journey of three composer-pianists who, like Chen himself, followed their destinies to the ‘New World’. Russians Sergei Rachmaninov and Vladimir Horowitz both found renewed fame in America, and Percy Grainger’s uncommon musical versatility found a second voice when he moved from Australia via England to America.

It’s an album that will appeal to the widest possible market. Who can fail to be seduced by Gershwin’s “Love Walked In” in the smoochy transcription by Percy Grainger. Or his Londonderry Air (which worked its way into one of the century’s biggest songs You Raise Me Up!). Vladimir Horowitz, one of the greatest virtuosos of all time, makes an appearance as both composer and transcriber.

The transcription of The Stars and Stripes Forever is one of the most difficult pieces ever written for piano. Rachmaninov is one of Moye Chen’s many specialities and he presents a range of pieces from this composer’s output - the gorgeous Melodie, the cheeky transcription of the ‘Menuet’ from Bizet’s L’Arlesienne, and the all-engulfing Second Sonata. He has already gained some wonderful reviews for his recordings:

His sense of structure is spot-on and he displays a technique and ear for nuance that makes him seemingly capable of taking on ever more challenging works.” - THE DAILY TELEGRAPH

“Chen is wonderfully inside Grainger’s crunchy textures and hearty sentimentality, and his reading of colonial song is particularly gorgeous.” - LIMELIGHT