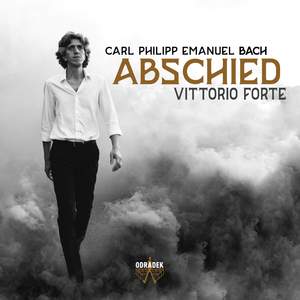 Works for Piano by C.P.E. Bach

The mercurial moods of the master of Empfindsamkeit, who is also arguably among the earliest important composers for the piano, are not easily rendered on the modern Steinway. Forte’s heartfelt... — Gramophone Magazine, July 2019 More…

For acclaimed pianist Vittorio Forte, Carl Philipp Emanuel Bach is a visionary who expanded the legacy of his father, J.S. Bach, offering his successors a blueprint for broadening music’s horizons. C.P.E. Bach’s music combines elements of J.S. Bach’s structural brilliance, Classical refinement, and Romantic emotional breadth, opening a door to a new musical era without turning its back on tradition. A “farewell” (Abschied) that does not deny the past, but rather draws deeply on this heritage.

This innovative and nuanced style, as heard on this recording, is characterised by rhetorical gestures including swift and frequent shifts in mood, rhythmic juxtapositions, irregular phrasing, widely-spaced melodic leaps, sighing motifs, numerous rests, false endings, and sudden injections of drama.

At the keyboard, C.P.E. Bach himself exuded both clarity and lyricism in his performances, often becoming completely absorbed during passages of improvisation. He was famed for his ability to improvise fantasias, taking detours into far-flung harmonic realms via whimsical rhythmic and structural flights of fancy.

On this recording, Vittorio Forte interprets a number of Bach’s most extraordinary fantasias, alongside a selection of his rondos, which were hugely popular during the composer’s lifetime. C.P.E. Bach’s rondos are often remarkable for the recurrence of the main theme in different keys and with some development, showing a sophistication which looks forward to the works of Mozart, Haydn and Beethoven.

The mercurial moods of the master of Empfindsamkeit, who is also arguably among the earliest important composers for the piano, are not easily rendered on the modern Steinway. Forte’s heartfelt and resourceful playing succeeds admirably…Adventurous listeners eager for a detour from the beaten path, not to mention connoisseurs of thoughtful piano-playing of cultivated sensibility, won’t want to miss this.