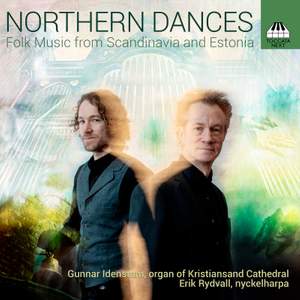 Folk Music from Scandinavia and Estonia

This is a very unusual offering and one that is most welcome. Not merely is the music enjoyable and rewarding, but the performances and the choice of instrumentation create a delightful sound... — MusicWeb International, October 2020 More…

Estonian Chorale (I Praise One Man)

Polska in A Minor

trad.: Polska in A Minor (after Karl Lindblad)

Polska from Åre (After Lapp-Nils)

This sparkling collection of folk dances from Norway and Sweden, offset by two Estonian chorales and three improvisations, comes from two of the finest practitioners of this kind of material: Gunnar Idenstam, playing on the new Klais organ of Kristiansand Cathedral in southern Norway, and Erik Rydvall, on the nyckelharpa, the keyed folk fiddle of Sweden. The combination of rhythmic vigor, the harmonic ambiguity of Scandinavian folk music and the huge range of instrumental color gives these tunes – all in spontaneous, semi-improvised performances – an irresistible and immediate appeal. Gunnar Idenstam, concert organist, composer and folk musician, is known throughout the world for his virtuouso playing, stunning improvisations and untraditional and original take on organ music. Gunnar Idenstam aims to expand his audience's appreciation of the organ and to transcend the limitations of genre. Born in 1983, Erik Rydvall began playing violin at the age of five, before at last discovering the nyckelharpa at 18. Between 2003 and 2008 Erik studied nyckelharpa at the Eric Sahlström Institute in Tobo and the Royal College of Music in Stockholm. Meeting the legendary nyckelharpa pioneers, Johan Hedin and Olov Johansson as well as other musicians such as Magnus Zetterlund and Anders Löfberg persuaded Erik to begin the development of his own approach.

This is a very unusual offering and one that is most welcome. Not merely is the music enjoyable and rewarding, but the performances and the choice of instrumentation create a delightful sound world, strange but strangely affecting. This is perfect late-night listening, filled with unexpected delights.