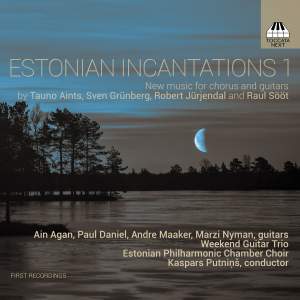 A splendid calling-card for Toccata’s new imprint; something fresh and unfailingly inventive. — MusicWeb International, May 2019

I. A Charm Against Flogging

II. A Charm Against Pain

Grünberg: Kas ma Sind leian? (Will I Find You?)

This remarkable recording explores an unsuspected soundworld – that of guitars, electric and acoustic, and chorus, in new works by five contemporary Estonian composers, whose styles range from the primitivism of ancient Estonian magical incantations via plainsong-like meditation to electronic sampling. Ain Agan writes of this release: “The idea for this recording came about thanks to a guitar festival which takes place in the town of Viljandi in southern Estonia. As I was compiling the festival programme, I began to look for opportunities to broaden guitar music with other musical groups. First and foremost, I wanted to commission some new Estonian compositions. As I have been active in the world of guitar music as a producer and musician for decades, I have many contacts and I know what people are capable of. Hence it was easy to decide whom to engage in the project. For the choral contribution, I immediately thought about the Estonian Philharmonic Chamber Choir, which is known around the world for its sensitive interpretations of different genres…”

A splendid calling-card for Toccata’s new imprint; something fresh and unfailingly inventive.