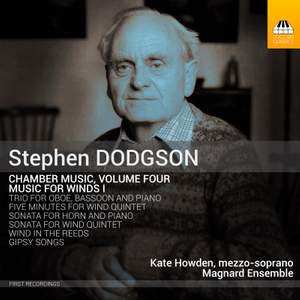 No. 1, A Tattered Nation

No. 3, The Lord Treasurer's Fortune Is Told

No. 4, The Faery Beam upon You

Dodgson: Wind in the Reeds

I. Lively and Accented

This fourth album in the Toccata Classics survey of the chamber music of London-born Stephen Dodgson (1924–2013) offers a first installment of his many works for woodwinds. Much of it brings Dodgson’s sense of fun to the fore, often through rhythmic mischief or an insouciance that recalls Poulenc, but it also has that particularly English strain of lyricism that suggests the impermanence of beauty. British composer and broadcaster Stephen Dodgson’s prolific musical output covered most genres, ranging from opera and large-scale orchestral music to chamber and instrumental music, as well as choral works and song. He wrote in a tonal, though sometimes unconventional, idiom. Paul Griffiths, in The Oxford Companion to Music, writes that Dodgson “proved adept at producing likable, well-crafted music to order, often for unusual chamber ensembles.”