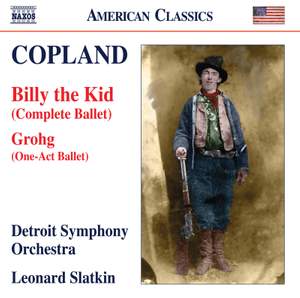 Copland’s deeply unsettling, Rite of Spring-like Grohg is a real discovery. The much more familiar Billy the Kid, meanwhile, is played with terrific swagger by Slatkin’s Detroit forces. — BBC Music Magazine, May 2019, 4 out of 5 stars More…

I. Introduction & Cortège - Entrance of Grohg

II. Dance of the Adolescent

III. Dance of the Opium-Eater (Visions of Jazz)

IV. Dance of the Street-Walker

V. Imagines the Dead Are Mocking Him

VI. Illumination and Disappearance of Grohg

I. Introduction. The Open Prairie

II. Street in a Frontier Town

VIc. Billy in the Desert. Waltz

Aaron Copland did as much as anyone in establishing American concert music on the world stage, and his ballet scores proved to be among his most important and influential works. Grohg is the most ambitious example of his Parisian years, a precociously brilliant one-act ballet scored for full orchestra, inspired by the silent expressionist film Nosferatu. The first example of Copland’s new ‘Americanized’ music of the 1930s was Billy the Kid, based on the life of the 19th century outlaw and heard here in its full version. This was the first fully fledged American ballet in style and content: brassy, syncopated, filmic and richly folk-flavoured.

Copland’s deeply unsettling, Rite of Spring-like Grohg is a real discovery. The much more familiar Billy the Kid, meanwhile, is played with terrific swagger by Slatkin’s Detroit forces.

An already promising cycle just got a whole lot better; super sonics from Soundmirror, too.

The DSO is at-one with its maestro and the music with playing of precision, vivid detail and sonorous projection, superbly recorded, too, with a natural perspective and a tangibility that puts the listener in one of Orchestra Hall’s best seats.