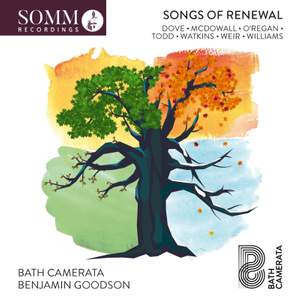 It’s a thoughtfully planned programme, presented to the highest standards and with virtuosic music-making that showcases Bath Camerata as one of the UK’s most innovative chamber choirs. — Choir & Organ, October 2019, 5 out of 5 stars More…

Dove: The Passing of the Year

II. The Narrow Bud Opens Her Beauties to the Sun

McDowall, C: Standing as I do before God

Watkins, H: The Phoenix and the Turtle

The promise of rebirth and rejuvenation is celebrated by SOMM Recordings’ Songs of Renewal, a collection of choral works – including three first recordings – by seven living British composers performed by Bath Camerata under musical director Benjamin Goodson. Joining the ensemble are soprano Elizabeth Cragg and composer-pianist Huw Watkins, whose Shakespeare setting The Phoenix and the Turtle (2014) moves puissantly from monotone chanting to solemn chorale for an allegorical poem mourning the passing of ideal love.

Commissioned by Bath Camerata to mark its 30th anniversary in 2017, the disc’s title track is a three-movement choral suite by Will Todd reflecting his interest in jazz music and featuring lyrics by the composer and former UK Poet Laureate Andrew Motion.

The earliest work, Jonathan Dove’s The Passing of the Year (2000), is a rich and varied tribute to the composer’s late mother cast in seven sections and setting an eclectic array of texts by William Blake, Emily Dickinson, Thomas Nashe and others. To words by E.E. Cummings, Judith Weir’s a blue true dream of a sky (2003) is, says English music specialist Jeremy Dibble in his booklet notes, “a revelation of the divine”. Cecilia McDowall’s Standing as I do before God is a moving centennial tribute to the British nurse Edith Cavell executed by the German army in 1915.

Commissioned by Bath Camerata in 2018, Everyone Sang sets a familiar text by First World War poet Siegfried Sassoon in a poignant and powerful riposte to the futility of war that holds out the curative promise that “the singing will never be done”. Bath Camerata’s previous recordings for SOMM, with its founding director Nigel Perrin, include The Choral Music of Antonín Tučapský (SOMMCD 205) and the Gramophone Critics’ Choice To Music, a collection of German Romantic part-songs (SOMMCD 215) hailed as a recording of “uniform excellence… everything here is outstanding”.

It’s a thoughtfully planned programme, presented to the highest standards and with virtuosic music-making that showcases Bath Camerata as one of the UK’s most innovative chamber choirs.