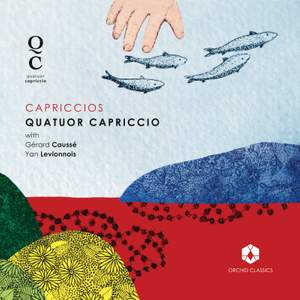 The award-winning Quatuor Capriccio presents an album inspired by its own name: Capriccio. There is a long tradition of capricious or whimsical virtuoso movements adding sparkle to the classical repertoire, and the earliest example featured on this collection forms part of Haydn’s Quartet No.2, Op.20. Mendelssohn’s Four Pieces for String Quartet are rounded off with a Capriccio of emotional depth, and the virtuosic tradition of Paganini’s Caprices is at the heart of a work by another virtuoso violinist-composer, Ysaÿe. There is a jaunty Capriccio from 20th-century composer Weinberg, and the album is brought up to date with a contemporary work dating from 2017 by South African composer Robert Fokkens. The album closes with the rich and intricate sextet from Richard Strauss’s opera, Capriccio, for which the Quatuor Capriccio is joined by Gérard Caussé on viola and Yan Levionnois on cello.