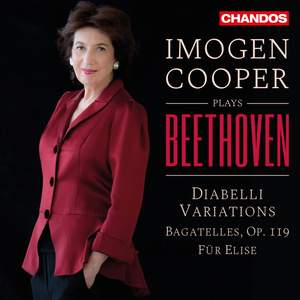 Cooper describes [the Diabellis] as ‘a wonderful journey…I am instantly in a good mood when practising or performing this piece.’ And that is what overwhelmingly comes over in her superb recording…Cooper... — BBC Music Magazine, May 2019, 5 out of 5 stars More…

Imogen Cooper is internationally renowned for her virtuosity and lyricism. This recording is her sixth release on Chandos Records. Cooper writes: ‘Beethoven’s Diabelli Variations are rightly considered to be among the greatest works for solo piano ever composed, by Beethoven or anyone else… Each variation tells a whole story, and for all that some are connected in mood, it is no mean feat as a performer to respect the huge scope of Beethoven’s vision.’

Cooper describes [the Diabellis] as ‘a wonderful journey…I am instantly in a good mood when practising or performing this piece.’ And that is what overwhelmingly comes over in her superb recording…Cooper never goes for effect per se: her goal is purely expressiveness. Für Elise comes like a thoughtful coda.

It takes real artistry to apply such subtle variations of expressive pressure from phrase to phrase as Cooper delights in. Every detail here is patiently appreciated and gracefully addressed: neither self-regardingly spelt out nor diminishing pieces to the status of a mere appetiser…Chandos’s recorded sound has a natural glow without ever compromising clarity.

A sincere, astutely layered and flawlessly delivered Diabelli Variations which ranks among the finest on disc.

Cooper’s technical command and musical insights are up there with those of her mentor, Alfred Brendel, or Stephen Kovacevich, and her thoughtful, melancholy delivery of the famous, enigmatic Für Elise is a delectable encore.

The British pianist’s magisterial grasp of every mood evoked in Beethoven’s greatest set of variations is a crowning achievement of her long recording career.

There’s so much to admire about Imogen Cooper’s playing: forensic detachment, faultless sense of idiom, and intellectual rigour.