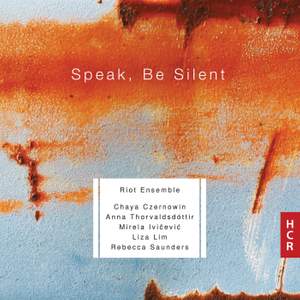 Czernowin: Ayre: Towed through plumes, thicket, asphalt, sawdust and hazardous air I shall not forget the sound of

Speak, Be Silent: I.

London’s Riot Ensemble present works by four of the most important composers in contemporary music today – Chaya Czernowin, Liza Lim, Rebecca Saunders, and Anna Thorvaldsdóttir – alongside rising star Mirela Ivičević, who was commissioned as part of the ensemble’s 2017 Call for Scores. Four of the works are recorded here for the first time.

Inspired by the poetry of Jalaluddin Rumi, Liza Lim’s violin concerto Speak, Be Silent, featuring American violinist Sarah Saviet as soloist, explores ideas of union and connection, as well as the ecstasy that comes at moments of change or transition. The atmospheric Ró – the Icelandic word for serenity – by Anna Thorvaldsdóttir is a piece of quiet but threatening moods that eventually comes to convey a fragile sense of identity and wholeness. In stark contrast, Mirela Ivičević’s Baby Magnify/Lilith’s New Toy features the capricious demon and seductress Lilith experimenting her way through a series of alchemical transformations.

Raw sonicmaterials come to the fore oncemore in Chaya Czernowin’s Ayre ..., a study in forms of instrumental resistance, friction, and flow. Despite its title, it is not a song in any conventional sense but is instead a bare impression of musical line, extended, elongated, and unadorned. Finally, Rebecca Saunders’ Stirrings Still II continues a longstanding fascination with the writings of Samuel Beckett, sharing its title with Beckett’s final work of prose. Through its fragile and haunting soundworld, the piece’s brittle textures and distant keening explore minute musical activities on the edge of extinction.

Riot Ensemble is one of the UK’s most ambitious new music ensembles. With an Artistic Board of 20 members and a wide network of performers, curators, commissioners, and collaborators, Riot Ensemble are dedicated to creating and producing a diverse array of projects in the UK and Europe. They are particularly active in bringing emerging international voices into the British new-music scene, and since 2012 have given 184 world and UK premieres by composers from more than thirty countries. An annual call for scores has resulted in almost twenty commissions. Riot Ensemble has performed at hcmf// (UK), Dark Music Days (Iceland), Tampere Biennale (Finland), Nordic Music Days (Sweden), Spitalfields Music Festival (UK), and Música en Segura (Spain).