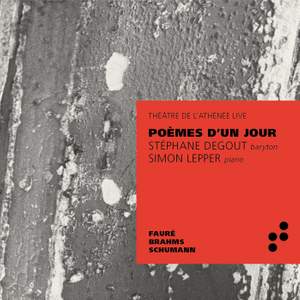 The qualities one values so much in Degout’s Fauré – the integration of text and line, his almost instinctive use of colour and dynamics, the uncompromising directness of expression – are those... — Gramophone Magazine, May 2019 More…

Short just as love, life, poetry, and a winter concert given at the Théâtre de l’Athénée, this new B Records album proposes a program of musical miniatures, from Fauré to Schumann and Brahms. An opportunity to hear the baritone Stéphane Degout, one of the best French melodists, and his partner Simon Lepper behind his piano, in a sometimes soft, sometimes stormy, always romantic album. French baritone Stephane Degout graduated from the Conservatoire National Superieur de Musique de Lyon and then became a member of the Atelier Lyrique de l’Opera de Lyon. He gained international attention in his debut as Papageno at the Festival d’Aix. Since then, he has appeared on major opera stages. He was appointed ‘Chevalier de l’Ordre des Arts et des Lettres’ in September 2012, a prestigious award which recognizes ‘significant contribution to the enrichment of French cultural inheritance.’

The qualities one values so much in Degout’s Fauré – the integration of text and line, his almost instinctive use of colour and dynamics, the uncompromising directness of expression – are those that also make his Brahms and Schumann so utterly compelling...None of it would be quite so overwhelming, though, without Lepper. This is very much a partnership of equals

It’s the first time I’ve heard Dégout in German repertoire, and he and Lepper are on mesmerising form here, brawny and exuberant in the more extrovert songs, and exquisitely tender in the cloistered intimacy of Stirb’, Lieb un Freud’!. Dichterliebe next, please.