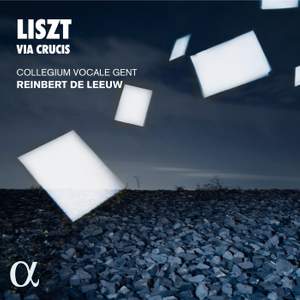 The work’s intense atmosphere is beautifully caught here by pianist-conductor Reinbert de Leeuw and the perfectly balanced vocal forces of Collegium Vocale Gent. With the addition of three Latin... — Choir & Organ, July 2019, 5 out of 5 stars More…

Franz Liszt was 67 when he composed his Via Crucis, yet it did not receive its first performance until 1929, 43 years after the composer’s death. This work of his mature years is in 15 sections, retracing the Stations of the Cross that mark the stages of Christ’s Passion, from being condemned to death to being laid in the tomb. Combining Gregorian chant, the Lutheran liturgy and the Latin, German and Aramaic languages, the Via Crucis shows real formal originality. A devout believer, Liszt gives us here his most important sacred work. He composed several versions: for mixed choir, soloists and organ (with the organ part optionally transcribed for piano), for piano solo, organ solo, and two pianos.

After a CD devoted to Janacek, the Collegium Vocale founded by Philippe Herreweghe is once again conducted by Reinbert de Leeuw in this new Alpha recording.

The work’s intense atmosphere is beautifully caught here by pianist-conductor Reinbert de Leeuw and the perfectly balanced vocal forces of Collegium Vocale Gent. With the addition of three Latin motets, this CD is a fine achievement and presents a more unusual kind of Passiontide music to the usual offerings.

It’s an exceptionally beautiful performance—the 16-voice choir (its color tinted by the presence of two counter-tenors in the alto section) has a gorgeous tone and a fine sense of ensemble; and everything is shaped with elegance. But it’s also a performance that tames the music’s provocations.

Throughout, de Leeuw maintains an almost transcendental poise as, from the piano, he steers the performance through an often stark and desolate musical landscape. With just 16 voices – four to each part – Collegium Vocale Gent perfectly match the intimacy of de Leeuw’s approach.

The spacious acoustic of Gent’s Sint-Machariuskerk provides an appropriately contemplative atmosphere for this account of Liszt’s meditations on the Stations of the Cross, written towards the end of the composer’s life but only premiered in 1929; the crystal-clear upper voices blend ideally in the Stabat Mater, and in De Leeuw’s hands the piano interludes seem to foreshadow Messiaen’s Vingt regards.

This is not the Liszt of dashing virtuosity, but the aged composer fighting depression and calling on his deep faith for help...De Leeuw, playing and conducting, and the Collegium Vocale Gent give this work, and three shorter late sacred masterpieces, with apt intensity.