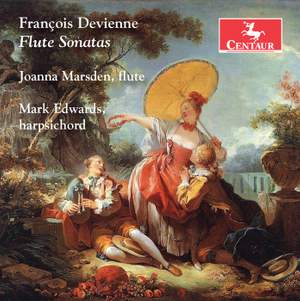 Flute Sonata No. 3 in G Major: I. Allegro maestoso

Francois Devienne (1759-1803) was an extraordinary flute and bassoon soloist. A prolific composer, he wrote hundreds of pieces. The works included on this release are some of his finest, and they are beautifully performed on period instruments. Joanna Marsden is a ‘fabulous’ (the Whole Note) flautist based in Montréal, Québec. She has performed recently in Belgium, Canada, Mexico, the Netherlands, Spain, Portugal, the United Kingdom, and the United States “beautifully” (Luis Gago, Madrid) and “with notable rhetorical clarity” (Boston Musical Intelligencer). First prize winner in the 2012 Musica Antiqua Bruges International Harpsichord Competition, Canadian harpsichordist and organist Mark Edwards is recognized for his captivating performances, bringing the listener “to new and unpredictable regions, using all of the resources of his instrument, [...] of his virtuosity, and of his imagination” (La Libre Belgique). Since 2016, he is Assistant Professor of Harpsichord at Oberlin Conservatory.