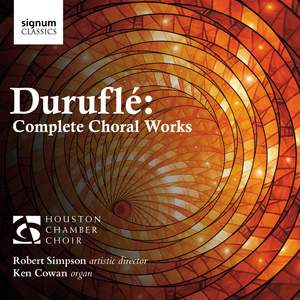 Recorded in warm, though not too reverberant acoustics, the choir’s tone is open and bright, and they and their conductor are sensitive to Duruflé’s demands. While they can be dramatic when needed,... — Choir & Organ, May 2019, 5 out of 5 stars More…

The choral works of Duruflé, like his organ works, are small in number but beautifully crafted. Frequently written and rewritten until he was completely satisfied, he was a composer who rethought and re-configured his music right up to the moment he had to let go of it. Often described as a man out of step with his times, his pieces look back to Gregorian chant and plainsong at a time when the musical life of his home city of Paris was steeped in radical new compositional ideas – a testament perhaps to Duruflé’s enduring love of France’s choral heritage.

In a new recording produced by Grammy® winning producer Blanton Alspaugh, the Houston Chamber Choir are led by artistic director Robert Simpson on their first release with Signum Records.

Recorded in warm, though not too reverberant acoustics, the choir’s tone is open and bright, and they and their conductor are sensitive to Duruflé’s demands. While they can be dramatic when needed, nothing is ever overstated – a temptation in this work, where there is little variety in tempi. The four unaccompanied Gregorian motets show offthe choir’s strengths to their best advantage.

The unique selling point here is the highly polished, virtually flawless sound of the Houston Chamber Choice. Here is a group that clearly enjoys the art of choral singing and in Robert Simpson they have a director whose focus on producing a superbly homogenous sound makes for warm, comfortable listening.