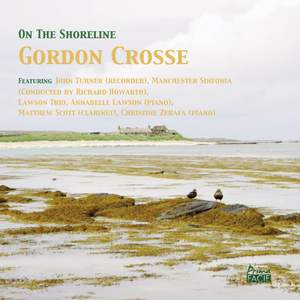 On The Shoreline: Gordon Crosse

Crosse, G: On The Shoreline

This disc features works written (or extensively revised) within the last six years, the most substantial of which is the Trio no.1 for Violin, Cello and Piano, originally written in 1985/6 for the Hartley Trio but substantially revised in 2012 for the Lawson Trio’s Park Lane Group concert at the Southbank Centre.

Other works on the disc include the Piano Sonata no.1 (2013/4), a work by turns robustly statuesque and ethereal and the witty miniatures Ron’s Toyes (2014) for solo piano, inspired by the intricate wooden toys of toymaker and artist, Ron Fuller. On the Shoreline (2016) for seven solo strings and sopranino recorder, is inspired by the landscape of Orkney and the movements of the sea birds over the course of a day, from dawn to dusk. Papay Sonata (2016), for clarinet and piano, was similarly inspired by the every-changing colours and weather of Papa Westray and, in the composer’s own words “above all, a joyful serenity from being nearly off the map”. The disc is performed by the Lawson Trio, joined by guest violinist Fenella Humphreys (the Trio’s debut disc with Prima Facie Records received a 5* review in BBC Music Magazine), pianist Annabelle Lawson, the Manchester Sinfonia (conducted by Richard Howarth) and clarinet and piano duo Matthew Scott and Christine Zerafa.