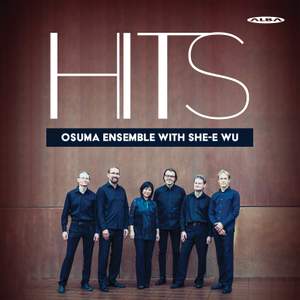 Timothy Ferchen: The Partials of Color

Ms. Wu and Osuma met at the Majaoja percussion competition in 2015 in Tampere, where Ms. Wu was invited to act as a judicator. Being the organizing members of the competition, the players of Osuma joined forces with Ms. Wu in a concert that was held on the final night of the competition. The collaboration on Blue Identity's Finnish premiere proved to be fruitful and the idea for a recording was immediately established. Three years later, the result of the collaboration can be heard on Tim Ferchen's Partials of Colour and She-e Wu's Blue Identity. Osuma Ensemble was founded in 2006 in Finland. The ensemble has performed at various Finnish festivals such as the Tampere Biennale, the “Time of Music” in Vitasaari and the Kuhmo Chamber Music Festival, as well as the Summer Music Academy and Festival in Toronto. Osuma Ensemble performs classics of percussion music alongside new works, as well as the music of several cultures from around the world.