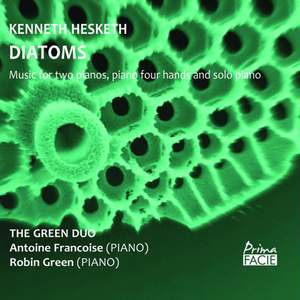 Hesketh: The Lullaby Of The Land Beyond

III. To DD (Skyhooks and Cranes)

IV. To CH in Memoriam

This fascinating new collection of work for two pianos, piano four hands and solo piano by the composer Kenneth Hesketh is performed by the Green Duo, Antoine Francoise and Robin Green. The album includes a moving tribute to composer Oliver Knussen in “The Lullaby of the Land Beyond (in fond memory of Oliver Knussen)” All but one of the works on this disc were originally conceived for different instrumental combinations (orchestra, quartet or large ensemble), and the versions recorded here, for two pianos, or piano four hands, were made specifically for the Francoise-Green piano duo. The one dedicated two-piano work that gives this disc its title, “Diatoms”, was written for and premiered by them. An innate and sensitive musicality, technical brilliance and penchant for bold programming lie at the heart of the Francoise-Green duo’s craft. This disc is a record of Kenneth Hesketh’s close interaction with them.

Kenneth Hesketh has been described as “a composer who both has something to say and the means to say it” (Tempo magazine). Hesketh is now a professor of composition and orchestration at the Royal College of Music and honorary professor at Liverpool University.

The disc comprises predominantly works for 4 hands and two pianos but two of the solo pieces are performed by the composer himself. One of the pieces is a moving tribute to the composer Oliver Knussen: “The Lullaby of the Land Beyond (in fond memory of Oliver Knussen)” The title of this short work comes from Stravinsky’s “Le baiser de la fee”, itself an elaboration of material by Tchaikovsky. That Stravinsky and lullaby feature together seemed an apt point of departure for a piece dedicated in fond memory of composer and conductor Oliver Knussen. Knussen’s affection for Stravinsky is well known, as was his penchant for lullabies of various types. Perhaps his most famous is the one he wrote for his daughter, Sonya. This lullaby is the first of various allusions to works that relate to Knussen’s work as well as the idea of death and memorial, be it Knussen’s second fantasy opera “Higgelty Piggelty Pop”, or his “Prayer Bell Sketch” (in memory of his friend Takemitsu) or even “Wozzeck”.

Two more distant ideas also feature, one a reference to the coronation scene from Mussorgsky’s “Boris Godunov” (which Knussen used in his first fantasy opera “Where the Wild Things Are”) and a lesser known work of Knussen’s, “Frammenti di Chiara” for female chorus.