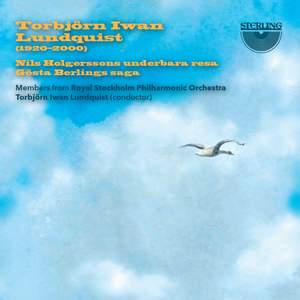 When Torbjorn Iwan Lundquist in 1962 was asked to compose the music score for the screen adaptation of Selma Lagerlof’s Nils Holgerssons underbara resa genom Sverige (Adventures of Nils Holgersson), he was already a well-known composer of film music. By 1954 he had written the scores for 16 films, and three other movies with his music were premiered the same year as Nils Holgersson. In 1962, Lundquist was engaged to compose the music for the grandiose and lavish ‘Adventure of Nils Holgersson,’ an adaptation of Selma Lagerlof’s novel, directed by Kenne Fant. It was to be a film in color with stunning aerial photographs of Sweden and with music by Lundquist. It was actually the first time a complete soundtrack in a Swedish film was released on LP. The Suite from this score is paired here with the Suites from Gosta Berling’s saga as well as some additional movements which were used in radio dramas.