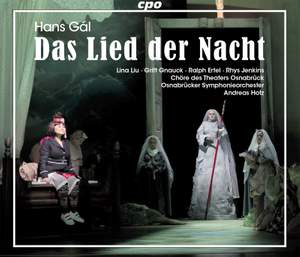 This world premiere recording…is an important act of restitution. Gál’s score, recalling in places Mahler and the Strauss of Ariadne auf Naxos yet possessed of its own voice, may not have sounded... — BBC Music Magazine, May 2019, 4 out of 5 stars More…

Act I: Was ist gewesen?

After 1933 nobody had the opportunity to hear this opera. Then the Osnabrück Music Theater rediscovered Das Lied der Nacht by Hans Gál and performed it in 2017. This late-romantic opera to a text by Karl Michael von Levetzow premiered in 1926, but since its composer was of Jewish origin, the Nazis prohibited stage productions of it. During his later years Hans Gál was doubly forgotten: as one of the many Jewish artists who were forced into exile by the Fascists and as a conservative "very-latest romanticist" pursuing paths laid out by Brahms and Richard Strauss. He himself described Das Lied der Nacht as a "dramatic ballad" symbolically representing the emotional world of a Sicilian hereditary princess destined for sovereignty. The text set in twelfth-century Palermo evokes a magical, romantic world in which Antiquity and Byzantine and Moorish elements combine to form a synthesis of rare fascination and a lyrical blend of European and Oriental culture. After the premiere at the end of May 2017, the NOZ wrote, "Fantastic music, a good libretto, a marvelous performance, an all-around successful rediscovery that the premiere audience in the Osnabrück Theater celebrated with abundant applause." Now on cpo and an absolute listening must!

This world premiere recording…is an important act of restitution. Gál’s score, recalling in places Mahler and the Strauss of Ariadne auf Naxos yet possessed of its own voice, may not have sounded especially modern when it was first heard in Breslau in 1926, but it does show the composer’s strong dramatic instincts.

Gál’s score is vivid and melodic, and shows him to have been a master orchestrator…Hotz, conducting the highly responsive Osnabrück Symphony orchestra, makes a fine case for this neglected work, as does the chorus. Hotz’s cast is blessed with a particularly strong group of female soloists…Liu, Vent-Wunderlich and Gnauck emerge as the stars.

Strong support from the Osnabrück Symphony under Andreas Hotz’s baton makes a persuasive case for an engaging, evocative piece.