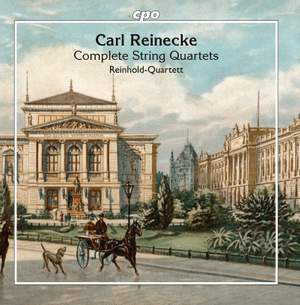 Although they don't reach inspirational heights, these quartets do offer the listener a positive experience. — MusicWeb International, April 2019

Five string quartets by Carl Reinecke from all the phases of his career, from its beginnings to his old age, are extant. He himself played the first violin in his father’s quartet and in this way very early became acquainted with an extensive quartet repertoire. When he began composing his first quartet, he not only was familiar with the contributions to this genre by Mozart and Beethoven but also knew Schumann’s brand new Quartets op. 41. Reinecke pays homage to Schumann’s music in particular in the lyrical moments of his Quartet No. 2. He composed the Quartets Nos. 3 and 4 during his years as the conductor of the Gewandhaus Orchestra. No. 3 surprises us with its expansive key plans, which also make us sit up and take notice in his subsequent quartets and undermine the cliché of a epigone who rigidly adhered to convention and academism. In his last contribution to the genre, the Quartet No. 5, he remains true to his style. This work perhaps sounds somewhat less like Schumann and somewhat more like Brahms, whose music Reinecke very much admired.

Although they don't reach inspirational heights, these quartets do offer the listener a positive experience.