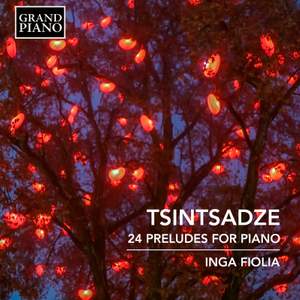 Lauded as one of the most original and brilliant of Georgian composers, Sulkhan Tsintsadze synthesised 20th-century classical elements with the rhythmic, melodic, harmonic and modal characteristics of Georgian folk music. In so doing he developed, across a wide spectrum of the repertoire, his own highly personal and approachable idiom. His 24 Preludes for Piano were composed in 1971 and are unmistakeably national in character. He gave new life to traditional Georgian folk songs and dances in a masterfully structured cycle that flows with the seamless eloquence of a film. This virtuosic kaleidoscope of contrasting images reveals music that is both extravagant and vibrant.