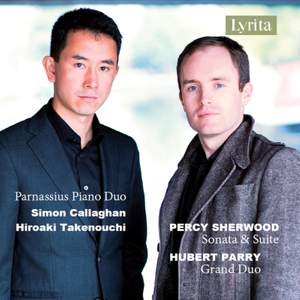 Simon Callaghan and Hiroaki Takenouchi met in 2003 and since then have had a thriving duo partnership. The two works by Sherwood presented on this disc were not published during the composer’s lifetime and are recorded here for the first time, using texts prepared and edited by Hiroaki Takenouchi from manuscripts held by the Bodleian Library. More ambitious than the Suite in terms of its scale and emotional range, the Sonata in C minor for two pianos was first performed by Sherwood and Hermann Scholtz on 27 April 1896. First performed in 1877, the Duo appeared in print in the same year as part of Breitkopf und Härtel’s high profile ‘Klavier-Bibliothek’ (‘Pianist’s Library’) series –the first edition of Parry’s music to be published abroad. Perhaps recognising the new opportunities that international recognition might bring. Despite inhabiting a quite different sound-world to Parry’s later choral works, the Duo therefore emerges as a pivotal work in his early career and musical development.