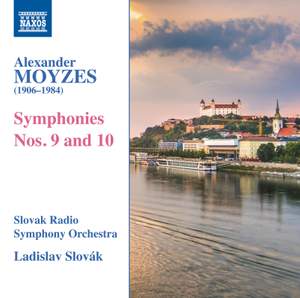 This Slovakian composer’s idiom resembles a more modernistic, lower-octane Shostakovich: Symphony No. 10 is the most convincing here. Decent, if rather earthbound Slovak Radio Symphony accounts. — BBC Music Magazine, May 2019, 3 out of 5 stars More…

Alexander Moyzes is considered one of the leading composers of his generation, his style skilfully fusing inspiration from both his Slovakian heritage and contemporary European trends. The premiere of his Ninth Symphony took place in 1971, only three years after the Soviet-led invasion of his homeland, and the work’s dark and dramatic atmosphere depicts the tragedy and hopelessness of this period. By contrast, the serene colours of the Tenth Symphony avoid political connotations, and the piece is stylistically typical of the composer’s last decade in its technical virtuosity, formal elegance and brilliant artistic design.

This Slovakian composer’s idiom resembles a more modernistic, lower-octane Shostakovich: Symphony No. 10 is the most convincing here. Decent, if rather earthbound Slovak Radio Symphony accounts.