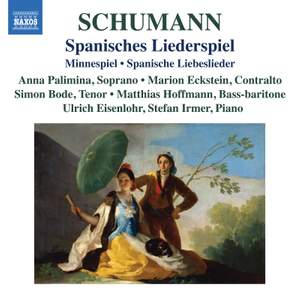 No. 8, So wahr die Sonne scheinet

In 1849, a year during which political upheavals still resonated across Europe, Schumann wrote three song cycles which combined solo songs, duets and quartets. He turned again to the works of a favourite poet, Friedrich Rückert, for Minnespiel, with its underlying religious theme, of which three of the eight settings are heard on this recording – a charming Spring setting, a duet, and the final quartet.

Both Spanish cycles imply dramatic narratives between a girl and boy. In Spanisches Liederspiel the music in places evokes Spanish rhythms such as the bolero, while its sequel, Spanische Liebeslieder, advances the cycle concept by employing piano duet accompaniment.