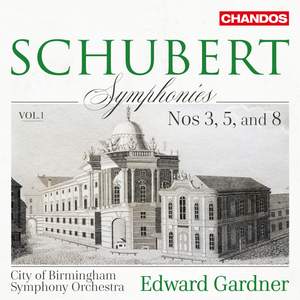 Gardner is very much on his way to Beechamesque status, though with very clear ideas of his own…Gardner keeps the firm rhythmic definition and a certain elegance of phrasing in the great Unfinished... — BBC Music Magazine, March 2019, 5 out of 5 stars More…

Following a highly successful series ‘Mendelssohn in Birmingham’, the City of Birmingham Symphony Orchestra with their former Chief Conductor Edward Gardner here presents the first volume in a new surround-sound series: Schubert Symphonies. This first volume comprises of three symphonies spanning across Schubert’s life. His Symphony No. 3 (1815), with its extensive and evolving slow introduction is followed by the culminating distillation of Schubertian classicism that is his ‘little’ Symphony No. 5 (1816). Scored for chamber orchestra, it tells of an influence of Mozart, for whom Schubert seemed to have felt a special affinity with around this time. Completing the album is Schubert’s much more intense (with a turbulent first movement and serene second) Symphony No. 8 “unfinished” (1822), of which only the first two movements and a skeleton sketch of a third Scherzo movement were completed.

Gardner is very much on his way to Beechamesque status, though with very clear ideas of his own…Gardner keeps the firm rhythmic definition and a certain elegance of phrasing in the great Unfinished but the sonorities…partly dictate a greater power, easily embraced in the spacious, truthful recording…On this evidence I can’t wait for Gardner’s Great C major.

The two earlier symphonies…can too easily sound routine if not played with the care for structure and phrasing that is characteristic of Gardner’s approach. The orchestra, too, are on fine form, with the woodwind especially making the most of their contributions, not least the clarinets…The same beauty of playing is present [in the Unfinished].

These spirited, state-of-the-art accounts are crowned by the most sensitive and satisfying account of the Unfinished I have ever heard.