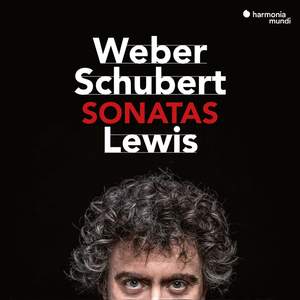 Lewis’s performance of the [Weber] sonata is warm and affectionate, without, perhaps, always achieving the intensity that Brendel brings to the music…Schubert’s early sonata in the unusual key... — BBC Music Magazine, April 2019, 4 out of 5 stars (Performance) / 5 out of 5 stars (Recording) More…

The British pianist radiates sympathy and imagination in two piano sonatas from the 1810s by young composers who both died before their fortieth birthdays.

Even if both of them were destined to die tragically of illness at a very early age (Weber at 39, Schubert just 31!), the two composers on this disc were healthy enough when they wrote these works, and were even beginning to taste success. Except that it was not to the piano sonata that they owed their fame: not without a twinkle in his eye, Paul Lewis has coupled their works in this genre in order to paint a different and highly elegant portrait of two musical dramatists who were emblematic figures of Austro-German Romanticism.

Lewis’s performance of the [Weber] sonata is warm and affectionate, without, perhaps, always achieving the intensity that Brendel brings to the music…Schubert’s early sonata in the unusual key of B major finds him experimenting with curious key-schemes and abrupt changes of mood. Lewis handles them very convincingly, and his performance is one that affords real pleasure throughout.

This latest instalment in Paul Lewis’s Schubert pilgrimage certainly enhances his reputation. It is, as always, intelligently laced and shaped, not needing to shout its credentials, but shaping contours as though accompanying unstated song texts. He has a particularly fine sense for how the music travels…And what a welcome coupling is the Weber Second Sonata.

[Weber] Lewis is fully attuned to the music’s sense of the spectacle of the new, especially in the ebb and flow of the opening Allegro, with its stormier episodes. His handling of the Andante’s mercurial variations and ensuing Menuetto capriccioso – definitely a scherzo, irrespective of the composer’s title – is no less adept, and the final Rondo is beguiling, paced to perfection. [Schubert] Lewis shapes the whole sonata beautifully. Harmonia Mundi’s sound is first-rate.