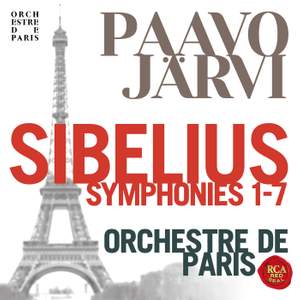 From the clarinet solo that opens No 1 to the unforgettable C major scale launching No 7, intensity and idiomatic intelligence abound. No 7 is magnificent, and aptly follows No 6 (they’re related)... — Sunday Times, 3rd February 2019 More…

The Estonian conductor talks to Katherine about recording the first-ever complete set of Sibelius symphonies with a French orchestra during his tenure as Music Director of the Orchestre de Paris.

Internationally acclaimed and Grammy winning conductor Paavo Järvi directs one of the worlds finest orchestra’s, the Orchestre de Paris, in this outstanding collection of all seven of Sibelius’ symphonies. As the music director of Orchestre de Paris (2019-2016), he has performed several works by Sibelius including the seven symphonies. In 2015, he was presented with the Sibelius medal by the Finnish Ambassador to France, Risto Piipponen, for his remarka-ble work in promoting the music of Sibelius throughout France. Sibelius: Complete Symphonies will be the first ever recording of Sibelius’ complete symphonies by a French orchestra. Jean Sibelius (1865 – 1957) is recognised as one of the greatest composers of the late Romantic periods. He is the most noted composer of Finland, and his seven symphonies are regularly performed and recorded both in his home country and worldwide.

From the clarinet solo that opens No 1 to the unforgettable C major scale launching No 7, intensity and idiomatic intelligence abound. No 7 is magnificent, and aptly follows No 6 (they’re related) in this achronological sequence. The mutation of No 5’s first movement into a scherzo is effortless.