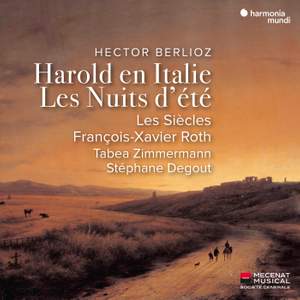 Recording of the Week,  Berlioz from François-Xavier Roth and Les Siècles

A new aesthetic calls for new forms: such is the challenge the composer Hector Berlioz set for himself in the two works presented here.

In Les Nuits d’été, Berlioz pioneered, well before Mahler and Ravel, a song cycle for voice and orchestra.

In Harold in Italy, scored for large orchestra and solo viola, he experimented with the symphonic genre.

These period-instrument performances by Les Siècles, led by François-Xavier Roth with violist Tabea Zimmermann, also feature Stéphane Degout in the vocal cycle, heard here in the composer’s own version for baritone.

Les Nuits d’été rapidly came to be seen as a vehicle for female voice. Stephane Dégout’s superb account makes clear this need not be so…Roth’s period-instrument ensemble Les Siècles provides superb support for Dégout, lifting rather than overpowering the voice…The orchestra is even more vivid when let loose on the adventures of Harold en Italie, bringing incisive rhythms, translucent textures and a fizzing energy, while Tabea Zimmermann holds nothing back.

This new recording with Tabea Zimmermann has much to recommend it… Zimmermann offers a darker, grainier tone than her earlier LSO Live account with Colin Davis but her approach hasn’t changed much…The Pilgrims trudge purposefully…and Roth instils fire into the last movement’s orgy…One couldn’t imagine a more sensitive baritone than Stephane Dégout, yet his burnished sound has plenty of muscle too.

The distinctive sonorities of their narrow-bore woodwinds and gut strings throw as much new light upon Berlioz’s High Romantic, Gothic and at times almost psychedelic sound-world as they did upon Debussy’s more ethereal writing...Dégout delves into the cycle's ambiguities with the textual sensitivity and wide range of subtle vocal colours which have made him such an outstanding Pélleas…Consistently compelling and in places downright revelatory.

The disc is unmissable, however, for the account of the song cycle by Degout, conceived for four different voice types, but usually sung by a soprano or mezzo. His beauty of tone and immaculate diction make an eloquent alternative to the irreplaceable Régine Crespin with Decca.

Les Siècles use woodwind and brass instruments from the middle decades of the 19th century, which, combined with the gut strings, create busy, buoyant textures over which Tabea Zimmermann’s solo viola can soar with ease, though there is no lack of tonal weight when the orchestra takes centre stage, as it does increasingly through the course of the work…[Degout's] delivery of these songs is impeccable.