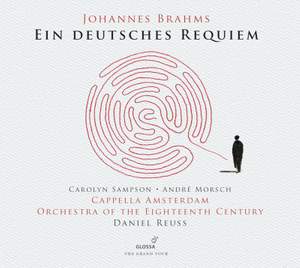 The smaller than usual choir for this work and the orchestra’s period instruments, together with a general observance of the metronome markings from the first performance in 1868, lend this reading... — Choir & Organ, May 2019, 4 out of 5 stars More…

Johannes Brahms’ consolatory Ein deutsches Requiem receives a fresh and considered interpretation from Daniel Reuss and the Orchestra Of The Eighteenth Century. This renowned orchestra took the decision - following the death, some years back, of Frans Brüggen - to retain its founder’s dynamic process of alternating concert tours with recordings. Dispensing with the need for having a principal conductor, the orchestra now works with a range of musicians according to the repertoire being performed.

Conductor Daniel Reuss is also the artistic director of the Cappella Amsterdam, the choir which has frequently been appearing alongside the orchestra in recent times. A well-received reading of the Beethoven Missa Solemnis involving Reuss and the orchestra was issued by Glossa in 2017 and these musical forces have now turned their attention to Johannes Brahms’ pillar of religious music.

Taped in the Rotterdam De Doelen concert hall this new recording involves Carolyn Sampson (soprano) and André Morsch (baritone) as its two soloists, in a version which attempts, as far as it is possible, to get close - in terms of tonal colours, interpretation and tempi - to Brahms’ original intentions.

This extraordinary work, here maintaining a sweeping and moving spirit for some 70 minutes, contains texts from Martin Luther’s German translation of the Bible and, it is thought, was inspired by the loss of both the composer’s mother and also that of Robert Schumann.

The smaller than usual choir for this work and the orchestra’s period instruments, together with a general observance of the metronome markings from the first performance in 1868, lend this reading greater textual transparency than we might be accustomed to. These features also contribute to the performance’s profound sense of calm, and the element of consolation Brahms was seeking to evoke.

[De Doelen’s] wooden walls enclose an ideally gentle resonating space for Brahms’s obsequy of consolation…Sampson takes her first phrase in one breath at an ideally judged tempo…I especially appreciate the way that Reuss patiently builds the fugues rather than driving them unmercifully in the modern fashion…Anyone who holds the German Requiem dear to their heart should find much here to treasure.