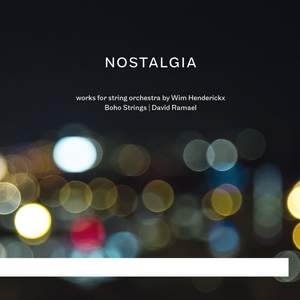 This is quintessential Henderickx heard through a different prism, with his usual exciting melange of ingredients and simplicity of gesture, but emphasising delicacy in itself rather than as... — BBC Music Magazine, March 2019, More…

Inasmuch as the works featured on this CD are revisions of earlier work, some specifically prepared for this recording, they capture the progress in a career which spans three decades. The most audible development is Henderickx's heightened sensitivity to inspiration from the East, which lends exoticism and the occasional melancholy to a diverse but reassuringly recognizable oeuvre.

With his new 13-player string orchestra Boho Strings, conductor David Ramael was originally inspired by the rich cultural and ethnic diversity of his birthplace and hometown Borgerhout. Cognisant of the importance of dialogue in this rich melting pot of cultures and traditions, he seeks to rethink the format of classical music concerts, inviting the listener to participate in a meaningful dialogue with the musicians - before, during and after the performance - on a wide range of social, demographic, cultural and ecological issues.

This is quintessential Henderickx heard through a different prism, with his usual exciting melange of ingredients and simplicity of gesture, but emphasising delicacy in itself rather than as a contrast…The highlight, though, is the superb Nostalgia, in which the strings are joined by all three soloists in a re-imagining of a striking work originally written for Middle-Eastern instruments.

The number of string ensembles active may be considerable but Boho Strings is second to none in terms of its dynamism and unanimity of response. Such qualities are to the fore on this first studio project…Henderickx writes demonstrably while never slavishly from a postmodernist perspective.