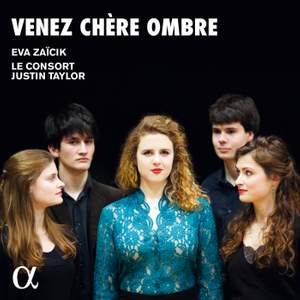 There’s a lovely vernal bloom to this Jardin des Voix alumna’s high-lying mezzo, and she’s fully alive to the taut drama of these concise French baroque cantatas, the majority of which receive... — Presto Music, January 2019 More…

Mezzo-soprano Eva Zaïcik, who has signed up with Alpha for several recordings, is one of the most prominent vocal artists of her generation. She was chosen as ‘Révélation lyrique’ at the Victoires de la Musique Classique 2018, and elected the same year a Laureate of the prestigious Queen Elizabeth of Belgium Competition. She has participated in the “Jardin des Voix” of les Arts Florissants under William Christie, also regularly collaborates with Le Poème Harmonique and Vincent Dumestre – but her constant accompanist is the harpsichordist Justin Taylor. Together with two other musician graduates, the violinists Théotime Langlois de Swarte and Sophie de Bardonnèche, they have founded Le Consort, to explore both sacred and secular works by composers such as Charpentier, Campra and Clérambault. For this recording they are joined by the flautist Anna Besson and gamba player Lucile Boulanger, both well-known to the Alpha label, as well as Louise Pierrard (viola da gamba) and Thibault Roussel (theorbo).This recording is devoted to the Cantatas of Lefebvre, Montéclair, Clérambault and Courbois, more than half of which have never previously been recorded. The cantata inspired non-operatic composers to play out the fashionable narratives of the day on a reduced scale, and in the intimate surroundings of the salons. It is a subtle genre and a vivid depiction of the characters.

There’s a lovely vernal bloom to this Jardin des Voix alumna’s high-lying mezzo, and she’s fully alive to the taut drama of these concise French baroque cantatas, the majority of which receive their recording premieres here: Courbois’s Ariane, Clérambault’s Héro and Lefevbre’s Andromède spring vividly to life, and are worthy to be set alongside Handel’s Agrippina, Lucrezia and Armida, whilst flautist Anna Besson provides delectable support in Monteclair’s pastoral La Bergère.