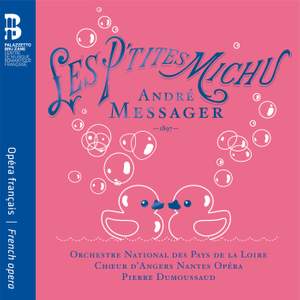 Les P’tites Michu of 1897 was one of [Messager’s] greatest hits, and little wonder with music of such charm and ingenuity…Pierre Dumoussand directs a consistently energetic account. Coordination... — BBC Music Magazine, April 2019, 4 out of 5 stars (Performance) / 3 out of 5 stars (Recording) More…

Two little girls, one of high birth, the other of more modest origins, mixed up in their bath and brought up as twins; an impending wedding; the first pangs of love and a few intrigues... On this amusing narrative framework by Albert Vanloo and Georges Duval, André Messager composed a score as graceful as it is invigorating. The straightforward, elegant melodies are immediately appealing, with a harmonisation and scoring that give them immense charm. Les P’tites Michu was an overnight success after its premiere at the Bouffes-Parisiens on 16 November 1897. The cast featured two big stars of the Parisian stage in the title roles, Alice Bonheur (Marie-Blanche) and Odette Dulac (Blanche-Marie). Every number in the score quickly became a ‘hit song’, notably the duet ‘Blanche-Marie et Marie-Blanche’. After a run of more than 150 performances, the work toured the provinces and was subsequently staged outside France (as The Little Michus or Die kleinen Michu), ending its career more than twenty years later on Broadway.

Les P’tites Michu of 1897 was one of [Messager’s] greatest hits, and little wonder with music of such charm and ingenuity…Pierre Dumoussand directs a consistently energetic account. Coordination between the sung numbers and the large amount of spoken dialogue is superb…All the singing roles are sharply characterised…The recording could be more resonant, but as a whole this is an impressive reading of a delightful work.

Once in a while Messager will do something both simple and audacious…The ‘sisters’ are well contrasted, Violette Polchi’s bright soprano offset by the rich mezzo of Anne-Aurore Cochet…The chorus and orchestra under Pierre Doumoussand are excellent

The cast is predominantly youthful, as is the conductor Pierre Dumoussaud. Their account of the work is uniformly spirited, energetic, sympathetique and also full of comic broadness. But there’s the rub.