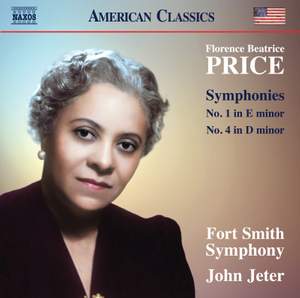 The E minor No. 1 starts on the same ground as Dvořák’s New World, but soon charts different terrain…all played with rhythmic élan, beguiling colour and evident joy. If not every corner is neat,... — BBC Music Magazine, April 2019, 4 out of 5 stars More…

Florence Price was born in Little Rock, Arkansas and studied at the New England Conservatory, but it was in Chicago that her composing career accelerated. The concert in 1933 at which her Symphony No. 1 in E minor was premiered was the first time a major American orchestra had performed a piece written by an African American woman. Influenced by Dvorák and Coleridge-Taylor, she drew on the wellspring of Negro spirituals and vernacular dances, full of lyricism and syncopation. The Symphony No. 4 in D minor demonstrates her tight ensemble writing, her distinct sense of orchestral color, her Ellingtonian ‘jungle style’ language and her penchant for the ‘juba’ dance.

The E minor No. 1 starts on the same ground as Dvořák’s New World, but soon charts different terrain…all played with rhythmic élan, beguiling colour and evident joy. If not every corner is neat, this is still the recording of the First Symphony to own. And it’s paired with the first recording of the Fourth Symphony…This is a rich score that winningly blends European and African American influences.

Her handling of the orchestra is idiomatic and strikingly original, with solos generously allocated throughout the ensemble. Each symphony describes a grand emotional trajectory, over the course of four movements, from deep seriousness to redemptive joy. The introduction or, more appropriately, restoration of Price’s unique voice is unquestionably an enrichment of the American symphonic canon.

The Fort Smith Symphony deliver riveting performances of these two symphonic works, under the direction of their charismatic conductor John Jeter. This compelling music could have no better advocates.

There's fun to be had in listening out for echoes of Dvořák in the First Symphony in particular (the brass chorale which opens the Largo sounds like the sunnier first-cousin of its counterpart in the New World), but Price’s quirky orchestration and innovative use of dance-rhythms are all her own – her writing for percussion is especially striking, and the juba-inspired scherzos are a delight.

The brio of the best Americana is present throughout [the Fourth], particularly in its rousing climax.

Engineers have captured exemplary sonics, this is an important issue. Don’t miss it!

Sugared and spiced by Price’s own idiom with its distinctive, tune-led feel for her native soil.