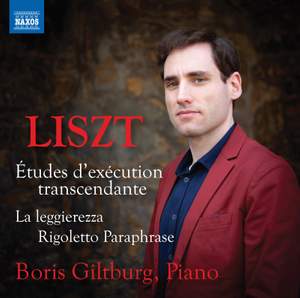 Giltburg is in the running for one of the top spots in the Liszt 'Transcendental' sweepstakes. — MusicWeb International, April 2019 More…

No. 9 in A-Flat Major "Ricordanza"

David talks to the Russian-born Israeli pianist about his recording of the Études d'exécution transcendante, released last Friday on Naxos.

Liszt’s Études d’exécution transcendante enshrine the spirit of High Romanticism, embodying extremes of expressive drama and technical virtuosity. His encyclopedic approach to technique is shown at its most dazzling in this cycle, heard here in the 1852 revision which Liszt himself declared ‘the only authentic one’. Integration of musical and technical elements is absolute, and the music’s narratives are supported by dramatic physicality, an orchestral richness of sonority, and an exceptional colouristic quality.

Boris Giltburg’s recordings for Naxos received numerous praises and awards. Recently he won Best Soloist Recording (20th/21st century) at the inaugural Opus Klassik Awards for his recording of Rachmaninov’s Second Piano Concerto with the Royal Scottish National Orchestra and Carlos Miguel Prieto, coupled with the Études-tableaux (8.573629). In May 2018 Naxos released his recording of the Third Piano Concerto and Corelli Variations with the same forces (8.573630), which has already garnered spectacular reviews including a Gramophone Editor’s Choice award.

Giltburg is in the running for one of the top spots in the Liszt 'Transcendental' sweepstakes.

It would be hard to imagine a more complete translation of virtuosity into poetry, the fiendish difficulties seized on as pure expressive bonus, so that one is aware of them as novel texture, never as wilfulness. Giltburg provides splendid liner notes, too

His dazzling performance of La Leggierezza is impressive.