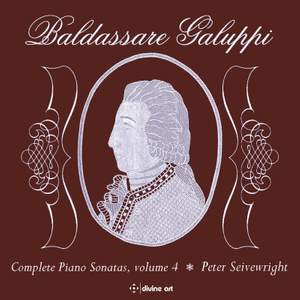 Keyboard Sonata in C Major, Illy No. 55: I. Andante

Keyboard Sonata in E-Flat Major, Illy No. 24: I. Cantabile

Peter Seivewright was amongst the first musicians to seriously research (in 1994) the 100+ keyboard sonatas by Venetian composer Galuppi, also famed as a pioneer of opera buffa. While others have since come to appreciate and record the fine variety and novelty of these works, for many personal and career reasons, Seivewright’s series was held up after volume 3 was released in 2004 but is now back on track with this intermediate album which includes also the G major Piano Concerto. Many of the sonatas have had to be reconstructed from single movement manuscripts. They show amazing diversity, from single-movement works to two- and three-movement pieces, and from basic baroque style to a Romanticism prescient of Schumann. Seivewright strongly believes that the works were specifically written for the pianoforte rather than harpsichord due to their frequent need for sostenuto and other factors. Peter Seivewright studied at Oxford then at the Royal Northern College of Music. He has performed extensively as recitalist and concerto soloist and has taught in colleges around the world, from Scotland to Trinidad to Afghanistan and most recently in Phnom Penh, Cambodia.