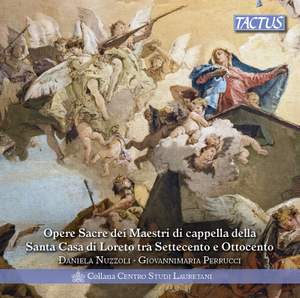 The music archives of the Italian region of Marche preserve a treasured testimony of an important past artistic activity. By narrating the political and cultural history of this region, the chapel masters make up an important, although less known musical heritage, which took place outside of the major musical centres in Italy. The Chapel of the Holy House of Loreto (forthwith Loreto Chapel) played a major part in this development and, because of this, became the main reference point during the production of this recording. This album presents unpublished compositions, which are kept in the archives of Loreto and Macerata, by authors who held office as chapel masters of the Holy House in the period between 1740 and 1866. Excluding perhaps Zingarelli, none of these composers are known outside the context of sacred music, and if so, they are known only locally. Their musical formation was, essentially, related to the Roman and Neapolitan schools and the likes of Fedele Fenaroli, Alessandro Speranza, Giuseppe Jannacconi; musicians whose didactic activity contributed a great deal to the success of many composers of the late eighteenth century, as creators of an outstanding vocal model. In describing the musical landscape in which this florilegium of small sacred creations was realized, one cannot ignore the refined compositional work of the Neapolitan Giuseppe Giordani (1751-1798), known as Giordaniello, the chapel master of the Fermo Cathedral from 1789 until his death, who was the author, amongst other things, of about one hundred compositions, from offertories to lamentations, for one or more voices and organo concertato.