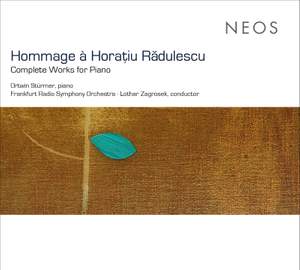 Only the first of these discs is newly recorded but the other two have been remastered to convey the precision and panache of Sturmer’s pianist with impressive clarity…This set is cordially recommended... — Gramophone Magazine, May 2019 More…

I. Use Your Own Light

II. Kalotrope of the Eternal

I. The Path into the Light Seems Dark

II. Darkness Within Darkness - The Gateway to All Understanding

III. Use Your Own Light - And Return to the Source of Light - This Is Called "Practicing Eternity"

Radulescu, H: Piano Sonata No. 2, Op. 82 'Being and Non-being Create Each Other

I. If You Stay in the Center

II. And Embrace Death with Your Whole Heart

IV. Dance of the Eternal

V. You Will Endure Forever

I. Trumpets of the Eternal

II. The Sacred Sound, the Second

On the tenth anniversary of Horatiu Radulescu’s death on 25 September 2018, NEOS presents a comprehensive document of a wonderful artistic friendship: the complete recording of Radulescu’s piano music, featuring the pianist Ortwin Sturmer.

Horatiu Radulescu, born in Bucharest on 7 January, lived in French exile from 1969 and became one of the leading exponents of spectralism; nonetheless, his music also has unmistakable roots in his home country of Romania. He was considered a sonic magician, a ‘philosopher of sound’. One of his decisive encounters, in 1990, was with Ortwin Sturmer; it was for him that Radulescu composed the second, third and fourth of the Zen-inspired Lao tzu Sonatas, as well as the large-scale piano concerto The Quest. It would have been wrong not to include the latter in this SACD box set - with the same musicians as the premiere, the Frankfurt Radio Symphony Orchestra under Lother Zagrosek.

Only the first of these discs is newly recorded but the other two have been remastered to convey the precision and panache of Sturmer’s pianist with impressive clarity…This set is cordially recommended as an exemplar for a composer like no other.