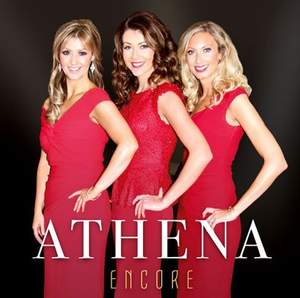 Somewhere Only We Know

One late summer’s evening, and as serendipity would have it, three popular Welsh soloists, Ellen Williams, Gwawr Edwards and Sioned Terry, united in song in front of a warm and receptive audience. The crowd’s enthusiastic response along with one or two encouraging individuals prompted the advent of the classical trio now known as Athena. A whirlwind twelve months followed that special evening with the trio performing nationwide in concerts and prestigious events.

It is with great pleasure therefore, that after a year together as a trio, Athena is delighted to present their debut CD, Encore on the Sain Records label. Along with a few traditional Welsh favourites, the CD comprises a mixture of classical and popular songs, which showcase Athena’s voices, with new and original arrangements; some of which are from the hands of the girls themselves.

Athena sincerely hope that Encore will bring much enjoyment to their already supportive audience and that it will capture the attention of listeners far and wide.