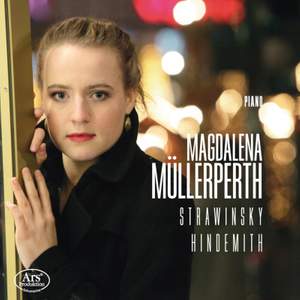 Magdalena Müllerperth (*1992) is one of the most engaging talents of her generation. She impresses her listeners with her original programmes, which often include unknown and rarely performed works. Here she plays piano works by two of the most important representatives of Classical Modernism, including Paul Hindemith's extremely rarely heard reconstructed Sonata Op. 17. A young German pianist, Magdalena Mullperth has already received in excess of 35 awards for musical excellence and has performed worldwide both solo and with accompaniment. Since 1999, she has won over 35 prizes at piano competitions including Les Recontres Internationales des Jeunes Pianistes de l'an 2002 in Belgium, The Permio Della Critica 2004 at the Concorso Europeo di Musica in Italy, the German State Piano Competition Jugend Musizient in 2005 and first prize at a competition held by the Minnesota Orchestra, Young People's Symphony Concert Association in the USA.