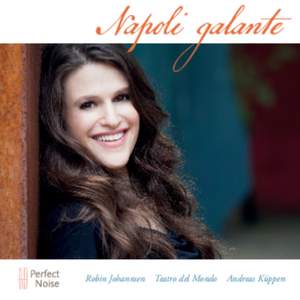 Soprano Robin Johannsen is joined by early music ensemble Teatro del Mondo on this album of works, including some premiere recordings, by Pergolesi, Scarlatti, Sarro, Vinci and Sellitto.

At the outset of the eighteenth century, Naples had gained ground as one of the most important musical centres in Italy. In 1729 Charles de Brosses wrote with great admiration in his Lettres familières: "Naples es la capitale du monde musicien." The Galant Style must be considered to be ground-breaking, and as preparatory for the Classical style. For example, an unbroken teacher-student lineage can be documented which reaches from Gaetano Greco (1657-1728) to Nicola Antonio Porpora (1686-1768), further to Joseph Haydn (1732-1809), and then on to Ludwig van Beethoven (1770-1826) and Carl Czerny (1791-1857).

American soprano Robin Johannsen came to Europe as a young artist with the Deutsche Oper Berlin and joined the company soon after as a soloist. Some highlights of the season 2017/2018 include the Telemann opera Miriways at NDR Hamburg's Telemann-Festival under Bernard Labadie, a new production of Entführung aus dem Serail (René Jacobs, conductor; Andrea Moses, director) at Salzburg's Mozarteum.