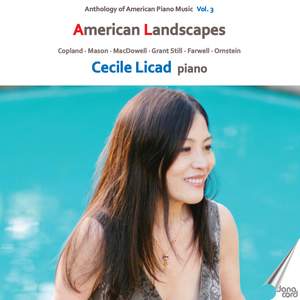 Copland: Down a Country Lane

Heinrich, A P: The Minstrel's March or Road to Kentucky

No. 3, At an Old Trysting Place

No. 5, From an Indian Lodge

Ornstein: A Morning in the Woods

Farwell: From Mesa and Plain

Idealized Indian Themes, Op. 54: No. 2, From the Land of the Sky-blue Water

Another release in our ongoing series of American Piano Music played by the brilliant pianist, Cecile Licad. This volume, concentrating on music inspired by the American Landscape, features many piano pieces not available in a modern digital recording and is essential to all lovers of piano music. Cecile Licad’s unique natural pianistic talent was recognized early. She began her piano studies at the age of 3 and made her debut as a soloist with the Philharmonic Orchestra of the Philippines in her native Manila at 7. When she was 12 she auditioned for Rudolf Serkin and was admitted to the Curtis Institute in Philadelphia. Ms. Licad’s international career was launched in 1981 after she had been awarded the prestigious Leventritt Gold Medal. Since then, Ms. Licad has appeared throughout the world alongside the finest symphonies and in solo recitals.