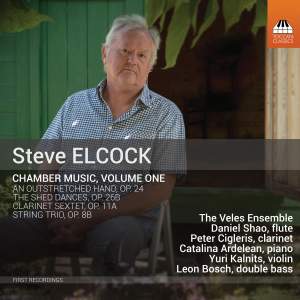 The performances are marvellous. The Veles Ensemble – a string trio – play throughout, with clarinettist Peter Cigleris the pick of their colleagues helping bring this terrific music to life. — Gramophone Magazine, April 2019 More…

The Shed Dances, Op. 26b: I. Disgruntled Waltz

The English composer Steve Elcock (b. 1957) spent years writing music without ever expecting it to be heard: based in rural France, he worked as a translator, composing ‘for the drawer’. A recent Toccata Classics recording of his Third Symphony and other orchestral pieces revealed him to be a major symphonic voice. The works on this first album of his chamber music show the same long-term control of harmonic tension, occasionally leavened by a mischievous sense of humour.

The Clarinet Sextet and The Shed Dances are immediately appealing in their melodiousness and harmonic language, whereas the darker, edgier String Trio No.1, with its stark juxtaposition of contrasts, and the sextet An Outstretched Hand, which treads a fine line between anger and grief, both offer powerful comment on our troubled 21st century.

The Veles Ensemble – Hartmut Richter, violin, Ralitsa Naydenova, viola, and Evva Mizerska, cello – is a string trio based in London, its repertoire both exploring rarely heard masterpieces and bringing the classics to life. A special interest of the ensemble is in promoting new compositions and contemporary music. The ensemble occasionally works with other musicians to expand for larger projects. This album is the Veles Ensemble's debut recording. The Ensemble takes its name from Veles, one of the main old Slavic gods – the god of earth, waters, forests and the underworld. He is also the god of magic and of music, which were believed to be closely related. The Ensemble is joined on this recording by five musicians from different corners of the world, all based in London.

The performances are marvellous. The Veles Ensemble – a string trio – play throughout, with clarinettist Peter Cigleris the pick of their colleagues helping bring this terrific music to life.

This outstanding disc offers further compelling evidence that the previously unrecognised Steve Elcock is a compositional force to be reckoned with.