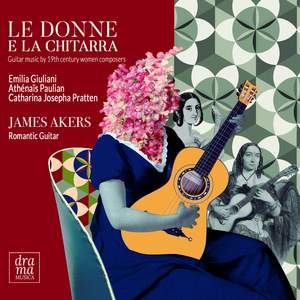 Paulian: Variations on a Theme of Mozart

Drama Musica invites you to explore the fascinating world of women composers, which will be featured on our new collection DONNE. The first release of this collection presents a selection of works -including world première recordings - by three overlooked women composers from the 19th century: Emilia Giuliani, Athénaïs Paulian and Catharina Pratten. If the conventional narrative of the guitar caused the neglect of a great deal of music, the composers featured on this recording suffered the added adversity of being women in a male dominated world. They were overlooked by history, occasionally referenced, footnoted as anomalies but rarely championed or performed. These works are performed here by celebrated guitarist James Akers. DONNE’s collection will also be featured on its dedicated website, which will continue the champion women composers.