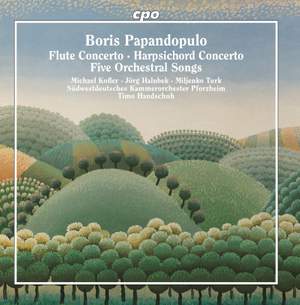 Timo Handschuh simply does a superlative job with the Southwest German Chamber Orchestra of Pforzheim. Phrasing is carefully contoured, with great attention to color. Clarity among all parts,... — Fanfare, March/April 2020 More…

Boris Papandopulo: his name sounds Greek, and yet he has to be regarded as the most important Croatian composer of the twentieth century. cpo's third release featuring this uncommonly versatile composer presents his Concertos for Piccolo and Harpsichord. As in many of his concertos for solo instruments and orchestra, here too Papandopulo draws on Baroque sources in his Harpsichord Concerto. The three characteristic movements follow the model fast-slow-fast in their sequence. In the introductory cantata the composer incorporates dodecaphonic features into the musical structure in a most highly individual and original manner in order then to blend them with compositional-technical elements of the Baroque. He employed the piccolo in many ways his works. It usually enabled him to evoke nature through musical means – the country idyll, the sounds of shepherd's pipes and birdcalls, and the stylized folk dance. Such a sunny, idyllic and Arcadian atmosphere also radiates throughout the Prelude with its stylized birdsong forming the beginning of the Little Concerto. His orchestral songs round off the CD.

Timo Handschuh simply does a superlative job with the Southwest German Chamber Orchestra of Pforzheim. Phrasing is carefully contoured, with great attention to color. Clarity among all parts, great lyrical warmth where warranted, and heavily accented rhythms in Papandopulo’s faster, dance-like passages all make this recording an excellent advocate for the composer.

If I was to commend just one Papandopulo disc to readers, it would be this fine issue.