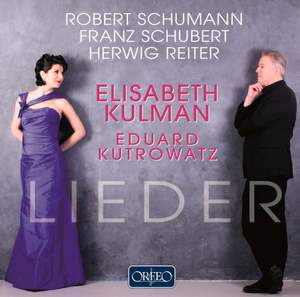 Elisabeth Kulman and Eduard Kutrowatz have for many years now been working together, as they share an artistic passion for the unusual and unconventional which has manifested itself in pushing the traditional boundaries between various eras and genres. They aim, in their Lieder programmes, to recount new, interrelated stories, and to this end, they combine song and pieces for piano in unusual sequences, sometimes plucking verses from one song and placing them individually in a programme; carefully and deliberately choosing keys that connect a number of Lieder in order to provide a dramatic link that results in exciting, flowing and sometimes imperceptible combinations. At the 2017 Schwarzenberg Schubertiade, Elisabeth Kulman and Eduard Kutrowatz dedicated the first part of their programme entirely to Robert Schumann. The lieder cycle Frauenliebe und Leben and the op. 104 songs form a common theme running through this part of the programme. For Elisabeth Kulman and Eduard Kutrowatz the key focus when choosing songs is always on the lyrics, the message, and what may lie behind it. It is therefore hardly surprising that they also chose poems by Erich Kästner set by the Austrian composer Herwig Reiter. His witty, ironic lyrics full of cryptic humor abound with worldly wisdom and hold up a mirror to their readers without merely moralizing or preaching. Placing Herwig Reiter’s settings in a dialogue with Lieder by Franz Schubert appears at first glance to be courageous, if not foolhardy. On closer inspection however the art of selection and comparison shown by Kulman and Kutrowatz in their choice of the songs by Reiter and Schubert proves to be the perfect symbiosis.