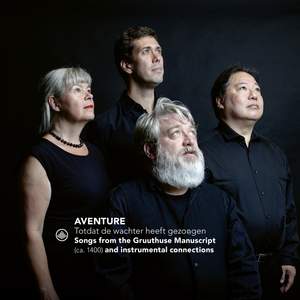 Songs from the Gruuthuse Manuscript (Ca. 1400) And Instrumental Connections

Vocal and instrumental ensemble Aventure perform music from the 15th-century Dutch-language Gruuthuse manuscript. The ensemble, which specialises in late-medieval music, is made of one voice and three recorders and their performances are based on the research they have conducted on a particular musical idiom and the cultural and historic context in which it existed.

The poems and songs of the Gruuthuse Manuscript originated in Bruges around 1400, and the collection is named after the later owner, Lodewijk van Gruuthuse. The songs form the most well-known part of the collection: love songs, bawdy songs and drinking songs. The Gruuthuse Manuscript contains the largest collection of Dutch language songs from the medieval period, and it is the largest collection of songs with music notation. The form of the songs also attests to the fact that these songs were intended for connoisseurs. The poet uses formes fixes, the canonized forms of French songs of the late medieval times: ballades, rondeaus and virelais, and the wide variety of the forms used is remarkable.