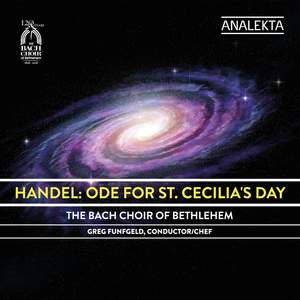 V. Recitative "When nature underneath a heap"

XII. Aria "But oh, what art can teach"

XV. Aria "As from the pow’r of sacred lays"

According to a note on the score, the Song for Saint Cecilia’s Day (HWV 76) – usually referred to as the Ode for Saint Cecilia’s Day – took just 10 days to compose, between 15 and 24 September 1739. The Ode is not an oratorio but rather a sequence of movements, comprising instrumental pieces, declarative recitatives, expressive arias, and powerful choruses that extol music and its patron saint.

The oldest Bach choir in the United States, The Bach Choir of Bethlehem celebrates its 120th birthday in 2018. Since its founding in 1898, the now famous choir has attracted thousands of visitors from across the United States and beyond to the annual Bethlehem Bach Festival in Pennsylvania.