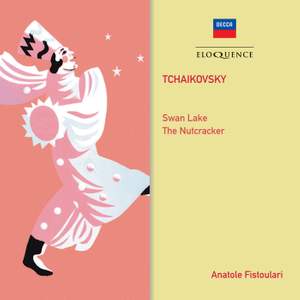 Fistoulari’s high-octane conducting has the LSO and Paris Conservatoire orchestra responding in soaring style. The Swan Lake excerpts include most of the ballet. Decent mono sound. — BBC Music Magazine, March 2019, 5 out of 5 stars

Dance of the Sugar-Plum Fairy

Waltz Of The Snowflakes

According to legend, Anatole Fistoulari (1907–1995) conducted an orchestra for the first time at the age of seven. Having moved to France in his twenties, he escaped to England after the fall of France in 1939 and based the rest of his career in the UK as a ballet specialist who became something of a house conductor for Decca, especially in Russian repertoire: a safe pair of hands, but also more than that, as this beautifully pointed version of Swan Lake reveals. Fistoulari returned to Swan Lake for Decca on two separate occasions, with the Concertgebouw in highlights and then in 1973 with the Netherlands Radio Philharmonic in Decca’s ‘Phase 4’ phase. However, deriving from Kingsway Hall sessions in January 1952, the attractions of this first version are considerable, not least the violin solos by Alfredo Campoli, who had been brought in at the insistence of the producer, John Culshaw, as a late replacement for the LSO’s leader of the day, George Stratton. A version of the complete ballet is used, abridged by Riccardo Drigo for the Mariinsky Theater in St. Petersburg. Condensed to under 90 minutes, this edition is more familiar than Tchaikovsky’s original score to many ballet-goers even now.

Thus there is room on this 2-CD set for another reissue of a complete Decca LP, excerpts from The Nutcracker recorded with the Paris Conservatoire Orchestra in June 1951. Fistoulari included not only the familiar ‘First’ Suite but a Second Suite of his own confection, featuring more music from the First Act such as the Waltz of the Snowflakes as well as the Spanish Dance from the Second-Act divertissement and the sublime Final Waltz and Apotheosis.

‘Fistoulari, who conceives the work on a broader scale [than a Prague-based recording], gives the music a more imposing sweep; it is the grand pattern than counts for him, and in achieving this pattern he gives us the feel of an actual ballet performance rather than a ballet recording … [the LSO] have been recorded with rare skill – sound that is resonant, clear and luminous.’ High Fidelity, October 1954 (Swan Lake)

‘His way with the ubiquitous Suite No. 1 is put in the shade only by Beecham’s – generally relaxed, danceable tempos, as if he can see the choreography transpiring before him, and he brings the same balletic feel to the other Nutcracker pieces, leaving out some repeats so he can squeeze in more music.’ Fanfare, July/August 2009 (Suites from The Nutcracker)

Fistoulari’s high-octane conducting has the LSO and Paris Conservatoire orchestra responding in soaring style. The Swan Lake excerpts include most of the ballet. Decent mono sound.