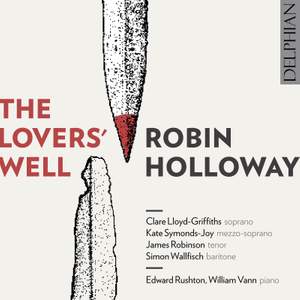 Like Britten, Holloway is an eclectic harvester of texts with a connoisseur’s nose for those where music can ‘add value’. Mezzo Kate Symonds-Joy makes a compelling case for A Medley of Nursery... — BBC Music Magazine, February 2019, 3 out of 5 stars More…

Holloway, R: The Food of Love

Words have lain at the heart of Robin Holloway’s music throughout half a century of prolific composing. Released on the day of his seventy-fifth birthday, this album brings together six stellar performers associated with Gonville & Caius College, Cambridge – where Holloway is a Fellow – in celebration of the lyrical and dramatic qualities of his abundant output, as well as its profound symbolism.

The Lovers’ Well draws on a cycle of poems by Geoffrey Hill whose themes – a Spanish castle, amorous longing, carnal guilt, a wound that will not heal – make it a dark brother to Souvenirs de Monsalvat, a ‘waltz-synthesis on themes from Wagner’s Parsifal’ for piano four hands. Violence is barely contained by the formal games of A Medley of Nursery Rhymes and Conundrums, while radiant beauty imbues two works bringing together all four voices: a mini-cantata on couplets by John Ruskin and a partsong to words by Shelley.

Like Britten, Holloway is an eclectic harvester of texts with a connoisseur’s nose for those where music can ‘add value’. Mezzo Kate Symonds-Joy makes a compelling case for A Medley of Nursery Rhymes and Conundrums, a pithy, sometimes comic cycle with roots in the late ‘70s. Its laconic immediacy is well served by Edward Rushton’s to-the-point pianism.

Marking Holloway’s 75th birthday, this album traces his preoccupation with music and text, both explicitly in the form of song-settings and cycles and implicitly in a work that treats music as text…The stand-out work on this recording is the song-cycle The Lovers’ Well…Here is a music that, despite its multifarious origins, is always, in Geraint Lewis’s words, 'masterly in realisation’.

Issued for Holloway’s 75th birthday, this “portrait disc” of some of his song cycles, alongside a piano four-hand recycling in waltz time of Parsifal (Souvenirs de Monsalvat), is like a modern Schubertiade — touchingly intimate, even domestic.