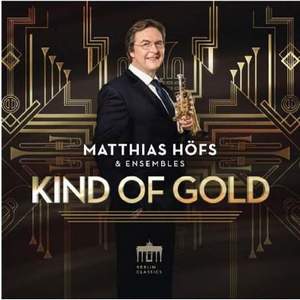 Stravinsky: Fanfare for a New Theatre

Kerschek: The trumpets shall sound

The trigger for this unique album was actually the realization that "there are very few works in the music literature in which one can experience such a concentrated sound," explains Matthias Höfs. And when one of Germany's most renowned trumpet virtuosos speaks of concentrated sound, then you can be sure he means a really phenomenal sound. Matthias Höfs has brought together current and former students from his trumpet class at the Hamburg Music College for this project. This gathering of colleagues, companions and friends who play for a number of the big German orchestras, make this album into something of a student reunion. Matthias Höfs thrills audiences, both alone and in various ensembles, playing works that are rarely given a hearing: be it Janácek's Sokol Fanfare from the Sinfonietta, Strauss's Festival Music for the City of Vienna (featuring 10 trumpets, 7 trombones, 2 tubas and timpani), two fanfares by Stravinsky or the Sinfonia & Caprice by the Japanese composer Itaru Sakai. The central focus is on Wolf Kerschek's "The Trumpets Shall Sound" for solo trumpet, nine trumpets and orchestra – a large-scale work which Kerschek, who is most at home in the fields of jazz and film music, wrote specially for Matthias Höfs. "What work calls for so many trumpets? As a composer, I had to come up with something special," says the composer, who also teaches at the College of Music and Drama in Hamburg. That is why his composition features a whole raft of different influences and approaches to the instrument. From trumpet signals and fanfares from a military context, echoes of ethereal, celestial heavenly realms and the trumpets of Judgment Day that brought down the walls of Jericho – all of them intellectual points of departure for the composer who has found in Matthias Höfs the perfect musical partner.